In the halcyon days before the financial crisis, there were a host of, by my lights, half-baked theories involving oil, the U.S. dollar, and U.S. foreign policy.  The general notion seemed to be that the dollar had a special status in the world because petroleum was priced in dollars, and petroleum was the most important commodity in international trade.  This is more or less nonsense, for reasons I will outsource to an age old Krugman post.

Yet, there is an important connection between oil and the power of the dollar, and it comes in through in the following chart: 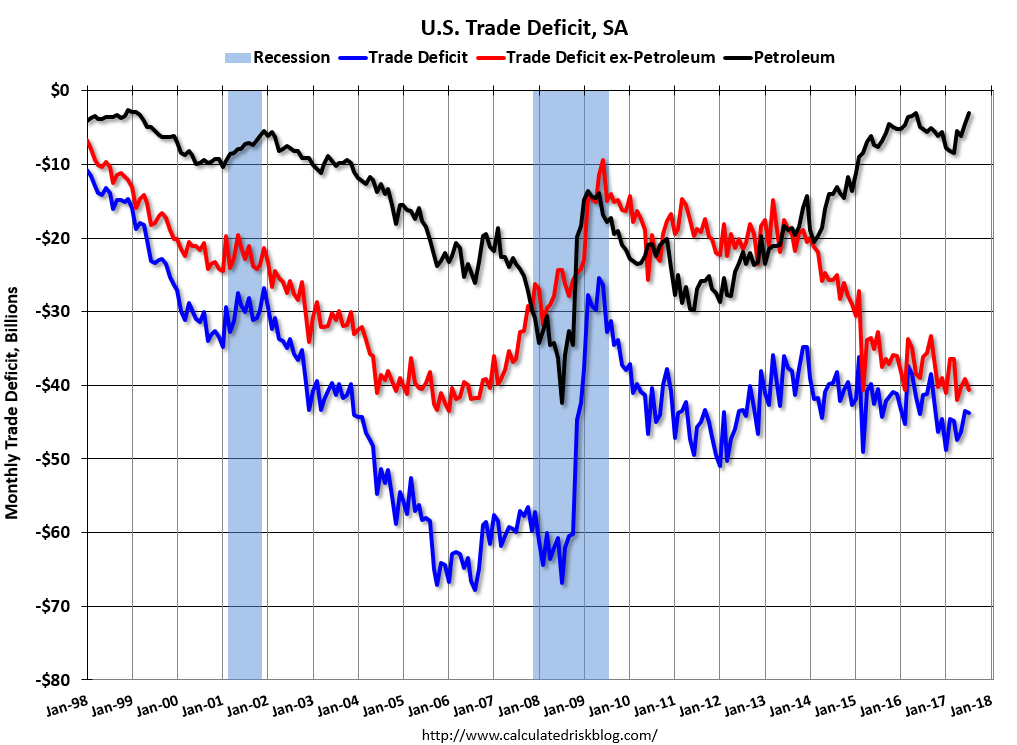 At its most pronounced, the U.S. trade deficit in petroleum was $43 billion a month, larger than the trade deficit in all other goods. Annualized, that amounts to $516 billion a year, and is a non-trivial fraction of total U.S. output. This has important currency implications. One reason that Modern Monetary Theory’s assertion that debt never matters doesn’t hold, is that the MMTers are waving away international trade and currency effects. Britain, for example, unlike the U.S. can’t ignore the international value of the pound when setting monetary policy, in part because Britain is dependent on imported natural gas. A collapsing pound would send natural gas prices sky high, and set off a vicious cycle in which gas prices depress the pound, which will in turn raise natural gas prices.

This story wouldn’t play out in the U.S. In the 2000s it might have seemed like the U.S. was becoming addicted to foreign oil, but this wasn’t actually the case. The vast stock of natural resources, combined with flexible competitive markets, meant that the U.S. could and did react. The reaction was what we now know as the fracking revolution.

Only a few, very in the know, folks understood ahead of time what a big deal fracking would be. But, that’s not my point. My point is that the dynamism of the U.S. economy means that solutions can and will come from places that are impossible for U.S. to foresee. That dynamism is the root of the power of the dollar. It is what makes the U.S. economy the most resilient in the world and, barring political meltdown, the U.S. government the most reliable borrower on earth.