Climate change will impact public health. Human society is vulnerable to environmental conditions, and when environmental conditions change, that vulnerability will be felt. But how much vulnerability do we have to changing conditions in the near-term? The United States Global Change Research Program (USGCRP) set out to answer these questions—for the United States—in a comprehensive new report published this week.

It is worth taking a look at, because advocates frequently cite climate change health impacts as a reason to reduce emissions of CO2 and other greenhouse gases. But skeptics frequently point out critical flaws in assessments of such impacts.

So what does this new report really tell us about climate risk?

It’s worth focusing on four areas where the USGCRP highlights peer-reviewed research in particular areas of concern: extreme heat, air pollution, water-related illness, and vector borne disease. The following are direct quotes from the research that highlight sections of the report:

Given the scale of climate change risks, the last two of these seem like small potatoes. Lyme disease is a serious and growing health concern, but the assessment does not quantitatively examine how another two weeks of Lyme season (provided by climate warming because of an earlier spring thaw) would affect human incidence. Likewise, Vibrio infection in seafood causes thousands of illnesses a year and about 100 deaths—but increasing probability of occurrence by 16% in the first and last months where it is a concern in  the Chesapeake Bay is not a guarantee of increased incidence (though note that the range increase is much larger in Alaska). These are important issues for public health officials in the Northeast or water quality managers, but they are of limited national concern.

The increased premature deaths from worsening air pollution and extreme heat are potentially more worrying and are of national concern, but one should be careful interpreting them because each relies on strong assumptions.

We know that warmer temperatures and weather changes will likely increase ozone levels in the surface atmosphere. The USGCRP’s research highlight on air pollution estimates that climate change will increase premature deaths to ozone pollution by hundreds to thousands and medical costs “from $320 million to $1.4 billion” by 2030. Differences between climate models contribute to the large range in those estimates.

But those estimates assume that the relationship between ozone levels and mortality is unchanged for the next fifteen years, and that climate-induced increases in ozone levels do not prompt increased regulatory action under the National Ambient Air Quality Standards.

Even without climate-induced increases, the scenario for ozone precursor emissions used in the USGCRP calculations does not include any effects from EPA’s recent revision to the air quality standards for ozone from 75 parts per billion (ppb) to 70 ppb. EPA estimates that the revision of the ozone standards will prevent hundreds of premature deaths, and result in economic benefits “estimated at $2.9 to 5.9 billion annually in 2025.” The revised air quality standards would have as large an impact on health and health care costs as the USGCRP predicts climate will damage them.

That exclusion of other policy measures illustrates one of the nuances of reading studies like this one produced by the USGCRP. Other factors affect the numbers coming out of these risk assessments. Adaptation to the changing climate, driven either by policy or just plain old market actors, might substantially offset these increased risks. Excluding those factors is not necessarily a failing on the part of the USGRCP study, but it does affect how it should be read by a decisionmaker.

The findings of the USGCRP’s research highlight on increased premature death from climate change is an example. This figure shows how temperature-related mortality changes in two different climate projections (using the same GHG scenario but a different climate model for each). The magenta bars show the increase in premature deaths due to heat and the green bars show decreased premature deaths due to cold with the net change in black. The increased mortality is larger than the decreased mortality from cold, leading to a net increase in temperature-mortality. 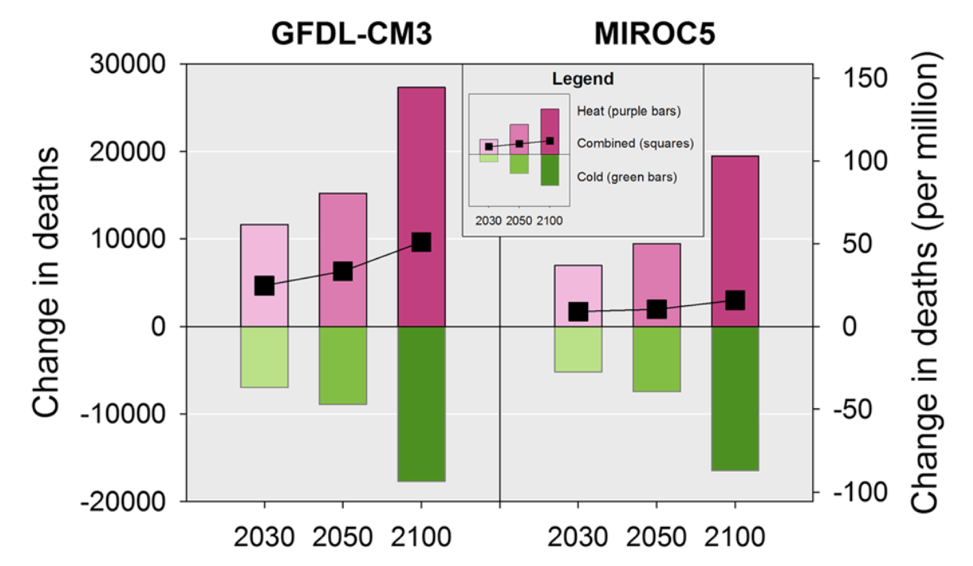 However, such analysis does not take adaptation (the purchase of air conditioners or other measures to reduce heat exposure) into account. A substantial body of literature has documented decreasing heat-related mortality over the 20th century that is at least partially explained by the widening use of air conditioners. Mortality to extreme heat dropped by 63 percent between 1987 and 2005. If adaptation can reduce the increased mortality in these predictions by 40 percent, then climate change will be a net benefit in human lives.

That’s not to say that extreme heat comes without other risks, like reduced productivity of outdoor labor due to heat stress, nor that adaptation is free or a perfect substitute for not increasing risk in the first place. For extreme heat, the energy demand of air conditioning costs money and increases energy spending (c.f. figure 10.3) and not all heat-related mortality can be solved by air-conditioners. Policy actions are not free either. The EPA estimates that the revised ozone standards will cost $1.4 billion in 2025, and industry thinks they could cost much more.

The USGCRP report is thorough and detailed in its assessment of the health risks of climate change. The case studies on the health impacts of climate change range from the obvious to some that are more difficult to fathom. Assessing changes in heat-related deaths and illness is fairly direct (though complicated). The psychological impact of extreme weather is assuredly real, but understanding the depth of its social and economic effect is daunting, whether or not climate change is worsening extremes.

For supporters of substantial policies to reduce emissions of CO2, it’s tempting to look toward any risk or cost of climate change as backing our case. And that’s especially true when it comes to emotionally and economically important topics like public health. But as these examples demonstrate, they are weak arguments for mitigation.