Each year, millions of disabled Americans face a perverse quid pro quo: In order to receive essential federal assistance, they must sacrifice the dignity of work and family. Problematic Supplemental Security Income (SSI) rules are a significant reason why. Since its creation in 1972, SSI has supported some of our most vulnerable populations. Yet while invaluable, the program penalizes labor, savings, assistance from family members, and marriage and will continue to do so until reformed.

SSI (not to be confused with Social Security Disability Insurance, which requires a work history) provides cash benefits to over 7.5 million low-income, low-wealth disabled or elderly individuals with limited capacity to work. The payments help cover essential items, lifting more than 1.5 million recipients out of poverty as a result. However, recipients are stuck between a rock and a hard place. Even though the program’s inadequate benefits leave 40 percent of recipients below the poverty line, its means-testing rules make it challenging to supplement the SSI payments or prepare for emergencies.

After three decades of inaction, beneficiaries are in dire need of program upgrades. Thankfully, Congress has a real chance to improve SSI in this legislative session. Most recently, Ohio Senators Sherrod Brown and Rob Portman released the Savings Penalty Elimination Act, which would allow recipients to retain more assets. Brown has also sponsored a more comprehensive reform bill, the SSI Restoration Act, that includes updated benefit levels and income rules as well.

First, strict asset limits ensure that SSI functions as a poverty trap rather than a financial foothold. Individual beneficiaries must maintain under $2,000 in savings — just 5 percent of the median family’s non housing wealth — or they lose eligibility. Fear of disqualification serves as a considerable disincentive to work — tens of thousands of adult recipients have their eligibility suspended or terminated each year for exceeding the savings limit. Meanwhile, prospective recipients cannot receive support until they unload their life savings. You could suffer an accident or illness that stops you from working full-time again, but SSI benefits won’t kick in until you financially plummet.

Second, SSI beneficiaries must work twice as hard to make a buck. After $85 in total monthly income, benefits are reduced by a dollar for every two dollars earned (a 50 percent marginal tax rate). Impairments do prevent recipients from working full-time, but the program’s stringent regulations often make it difficult to justify working in any capacity. Working recipients often  see most of their earnings cut in half. Rather than rewarding work like the Earned Income Tax Credit, which increases in size with every dollar earned, SSI does the opposite.

Third, families may want to assist relatives on SSI, but their support is functionally canceled out. Only $20 of unearned income (Social Security benefits, unemployment checks, cash from relatives, etc.) are omitted from benefit considerations each month. Beyond that, recipients see their SSI benefits reduced dollar for dollar. Even caring gestures, like a friend getting you groceries, are penalized. Up to one-third of a recipient’s total benefit can be deducted for “in-kind” assistance (direct provision of groceries, housing, etc.). Other federal programs do not factor in that type of support when determining benefits.

Fourth, recipients must choose between marrying the person they love or retaining benefits that make their daily lives possible. Marrying another SSI recipient shrinks your combined SSI benefit amount and asset limit by a quarter ($1,682 → $1,261 in benefits and $4,000 → $3,000 in allowed assets per couple), and marrying a non-SSI recipient can eliminate your eligibility altogether. It’s not a real decision because the benefits are indispensable. The proof is in the pudding — almost half of working-age adult SSI recipients have never married, 20 percentage points higher than for the general population.

What has Congress done to correct SSI’s flaws? The answer, in short, is not much. In the rare instances where policymakers addressed problems, the legislation was limited in scope and didn’t fully resolve program issues. Legislators attached a cost-of-living adjustment to the program’s maximum benefit in the 1970s but did not elevate the biggest benefit level to at least the poverty line. The asset limits were raised in the 1980s but not indexed for inflation. Meanwhile, the amounts of omitted earned and unearned income before benefits phase out have not increased since SSI was created. The lack of inflation adjustments has led to perpetually tighter limits. It’s well past the time for comprehensive SSI reforms.

Fixes now on the table

Fortunately, Brown and Portman’s bill, the Savings Penalty Elimination Act, would begin to fix SSI by updating the program’s asset caps. The limits would be raised to $10,000 for individuals and $20,000 for couples (currently $2,000 and $3,000, respectively) and indexed to inflation so the value does not erode over time. In addition, the bill eliminates the marriage penalties current asset rules set up for eligible couples.

Brown also bundles these ideas into a broader package of reforms known as the SSI Restoration Act. Notably, the maximum individual benefit would be increased to the federal poverty level (which is popular with voters), ensuring that any SSI-eligible individual is officially at or above the poverty line. Monthly income amounts omitted from benefits calculations would increase to $128 for unearned income and $416 for earned income — a total omitted-income threshold of $544 for working recipients — and indexed to inflation. “In-kind” support from family and friends would no longer result in benefit reductions, and eligible couples would no longer face a benefit penalty for getting married. 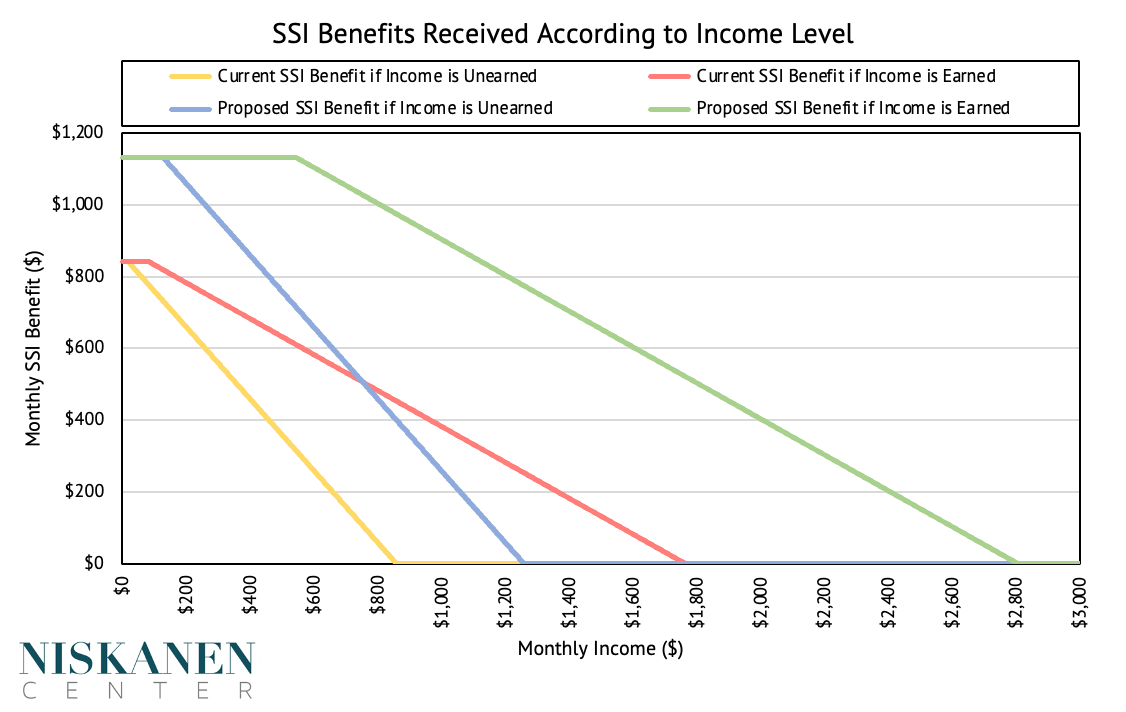 Recipients could work more without being hit with SSI benefit reductions, and family assistance would be less penalized. The higher omitted-income levels would also enable more medically eligible people to qualify for partial benefits. Benefits would be available to those with annual income under about $34,000 with the reforms, compared to about $21,000 under current rules.

SSI has contained major design flaws since its inception. The asset and income rules still lack cost-of-living adjustments. Benefit sizes are too small. On top of this, family assistance and marriage are unfairly penalized. The SSI Restoration Act and the Savings Penalty Elimination Act make long-needed course corrections.

Policymakers, to be clear, should consider going further than the proposed legislation. For instance, asset limits could be removed entirely to allow people to hold onto their life savings, as Brown has suggested doing with other benefit programs. More or all income could even be disregarded when determining benefit amounts, helping to minimize work penalties and maximize recipients’ financial stability.

Nevertheless, if every SSI Restoration Act provision was passed, all recipients would be brought over the annual poverty line while work, savings, and family values would be better rewarded. After decades of inaction, recipients would finally gain the dignity they deserve.