Matt Yglesias updates his case for immigration. The latest version includes this on immigration and crime:

To the extent that you want to whip people into an anti-immigrant fervor, it’s a good idea. There are millions of foreign-born people in the United States, and naturally every day some of them are caught committing crimes. Indeed, because immigrants are younger on average than native-born Americans, they commit a somewhat disproportionate share of crime. 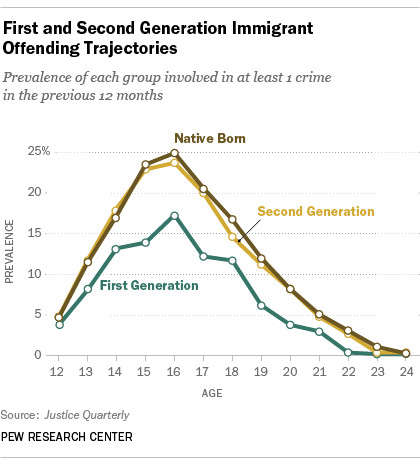 Indeed, the great trajectory of immigration and crime is that second-generation youth — kids whose parents were born abroad — largely assimilate to US behavior norms rather than maintaining the better behavior of their foreign-born parents.

This is exactly what economics would predict. What attracts immigrants to America is our culture’s and our constitution’s emphasis on individual freedom. This attracts some folks directly, who want an environment in which they can pursue their individual vision of the good. It attracts many more indirectly, as a result of the vibrant and flexible labor market those values produce.

However, as good neoliberal pragmatists, we should recognize that these gains do not come without costs. One consequence of greater individual freedom is the freedom to do bad things. Our pluralistic society and the checks-and-balances on our judicial system reduce the normative and legal costs of deviant behavior. As a result, we get more—though I think the proper way to view this is not as optimizing, homo economicus, from individuals. The low cost of deviance produces a more deviant culture. This is why we see first generation kids who carry with them the norms of their homeland and commit crimes at a lower rate, unlike second-generation kids who are socialized under America’s blanket of individual freedom.