Noah Smith on the Minimum Wage

In his latest column, my Bloomberg View colleague Noah Smith argues that:

The evidence on labor markets has evolved, and the dominant theories need to change with the times.

On this point, I couldn’t agree more. Indeed, in my Bloomberg View column early last month I used the minimum wage debate as an example of where economics was sorely lacking in good theory.

Noah goes on, however, to suggest:

Textbook writers and instructors should respond by changing the baseline model of labor markets that gets taught in class. Students ought to start with a model of market power, in which a few companies set wages below levels found in a competitive market unless prevented from doing so. That model is about as easy to work with as the traditional supply-and-demand setup, but matches the data much better

Here I have to part ways. While it’s probably best if the textbooks stop teaching the minimum wage as a conical example of how price floors work in competitive markets, teaching them as an example of market power would be worse.

Because we lack a solid theory of exactly how labor markets do work. For example, simple monopsony models are, as Noah says, relatively easy to work with. They don’t, however, just predict that minimum wage increases wouldn’t decrease employment. They predict that minimum wage increases will increase employment. Indeed, this core goes to the very idea of monopsony; which is, that market power in the hands of buyers.

When a single buyer holds market power, she will purchase less than she would in a competitive market. Her purchases are driving up the price and so she holds off, buying less than she would otherwise want so that she can enjoy a lower price. If this is the true underlying dynamics of the labor market then minimum wage increases should reliably be expected to increase employment and expand output. 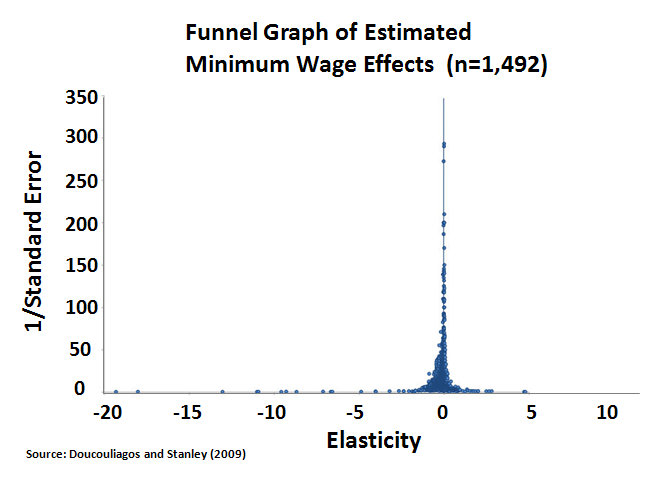 The evidence is clearly clustered around zero. However, to the extent that there is any leaning in the evidence, it’s negative, not positive.

The answer could be that it’s not simple monopsony, but monopsonistic competition that best describes labor markets. In that, more complicated model employers do try to hold the wage, but that just encourages other businesses to start up. The increase in the total number of businesses drives the wage back up.

Adding another pinch of complexity, if businesses know that they are in a monosonitically competitive market then they will realize their chances of failing have gone up and for that reason, they will be more reluctant to expand employment even though the increase in the minimum wage gives them a temporary incentive to do so.

That story is, I think, more consistent with the existing data. The important point, however, is that it and many other possibilities have not been tested or even rigorously debated. We simply lack a sophisticated theory of the labor market and should be upfront with the public and students about that.