What’s behind the increase in household wealth?

Matthew C. Klein argues that tax cuts are behind the run-up in household wealth we’ve seen over the past three decades.

Net interest payments plus profits after taxes (excluding the Federal Reserve) have nearly doubled relative to the gross value added by the private corporate sector. The decline in the tax burden is almost entirely responsible…Investors also benefited from reductions in the government’s collection of interest, dividend, and capital gains income….all together they help explain why household net worth (excluding housing wealth and mortgage debt) grew about 1.5x as much as household disposable income

The graphs he displays, however, tell a somewhat different story 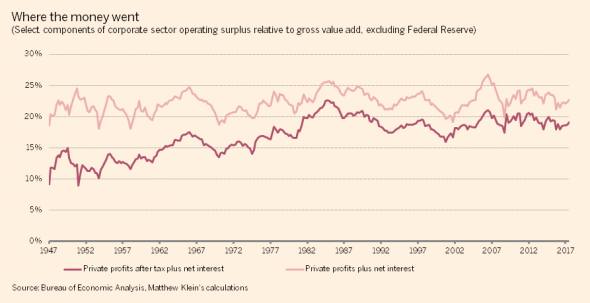 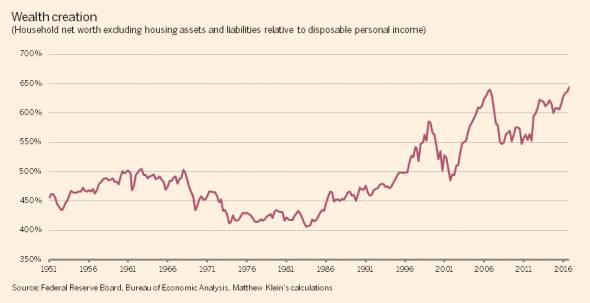 The upper graph shows the difference between before-tax and after-tax profits as a percentage of value added. The lower should show household wealth as a multiple of disposable income. Klein’s claim is that the progressive narrowing of the gap in the upper graph is responsible for the increase we see overtime in the lower.

The timing, however, is off.

The lower graph hits its nadir in about 1983. By that time, the narrowing of the gap in the upper graph had been accomplished. Indeed, eyeballing suggests that 1983 might have been the narrowest the gap ever got.

Put another way, the increase in profits that came from lower corporate tax rates had been largely accomplished before household wealth took off. What then is responsible for the rise in household wealth?

Virtually all of it, I’d argue, stems from an increase in the price-to-earnings ratio. That is, holding the profits, or earnings, of a company constant, the price of its stock has soared in recent decades. Below is Robert Shiller, famous Cyclically Adjusted Price-to-Earnings measure (CAPE.)

Shiller’s data starts in the late 1800s, so you’ll have to go roughly to the middle to match where Klein’s data picks up. The patterns from that point forward significantly overlap.

Indeed, Shiller’s CAPE hits a nadir right around 1983, just as Klein’s lower graph, income-to-wealth, does. It then rises to a peak in the late 90s, a less pronounced peak in the mid-naughts, and a third peak today. What’s driving both phenomena I’d argue is a decline in real interest rates. That drove up both price-to-earning and income-to-wealth.