As the 2022 elections come into focus, a campaign video titled ‘One Single Income’ from Senate candidate Blake Masters (R-AZ) has generated a lot of attention. In the minute-long clip, Masters argues that families should be able to live comfortably off a single income with one parent at home raising the kids. Attaining that family arrangement is a key component to many people’s vision of the American Dream. As such, if more families want to become single-earner households, let’s make that possible.

The first step is expanding programs that grow and protect family resources. Improvements to income support programs like the Child Tax Credit and the Earned Income Tax Credit have increasingly led the nation towards the ‘One Single Income’ goal. Policymakers should also strengthen unemployment insurance (UI) programs to help households manage income disruptions. Although unemployment is commonplace and unavoidable, recipients of unemployment benefits suffer from a uniquely elevated perception of unworthiness. It is critical that workers receive adequate financial support through these ordinary yet unexpected labor transitions.

The average worker has experienced a bout of unemployment every six years. Per that metric, if a worker raises a child from birth, they will face unemployment around three times before the child graduates from high school. Even short disruptions challenge a family’s economic stability. Loss of income for a few weeks, or even a few days, can be catastrophic.

Unemployment insurance benefits are crucial for covering the essentials (food, housing, etc.) during those transitions. Still, due to strict eligibility criteria and administrative burdens, most individuals don’t qualify for unemployment insurance, with only about one in four unemployed workers receiving benefits. Likewise, those eligible often don’t receive enough benefits to remain financially secure between jobs. UI recipients have 40 percent of their income replaced on average, an inadequate rate. Most single-income households will not be financially secure if the sole breadwinner loses their job, especially lower-income households.

In contrast, in homes with two adults working, the income drop will represent a smaller percentage of the household income. Consider Families A and B – each comprises two adults and two kids. In Family A, each adult earns $35,000/year at their job. In Family B, the sole breadwinner earns $70,000/year (similar to the median U.S. household income). Suddenly, each household has a worker who loses their job. What is the impact on each family’s pre-tax income with unemployment insurance?

Figure One (below) illustrates how UI helps each family weather the storm (keep in mind, before-tax income is looked at for illustrative purposes). The X-axis represents the percent of the unemployed workers’ income replaced by unemployment insurance; the Y-axis represents the annualized household income ($) after the job loss. The green line tracks Family A’s income level, and the blue line is Family B’s income level. We can determine the decline in family income by observing how far the green and blue lines fall below the horizontal yellow line, which marks the $70,000 household income pre-unemployment. With a UI replacement rate of 40 percent, Family A’s income drops to $49,000/year while Family B’s income drops to $28,000/year. 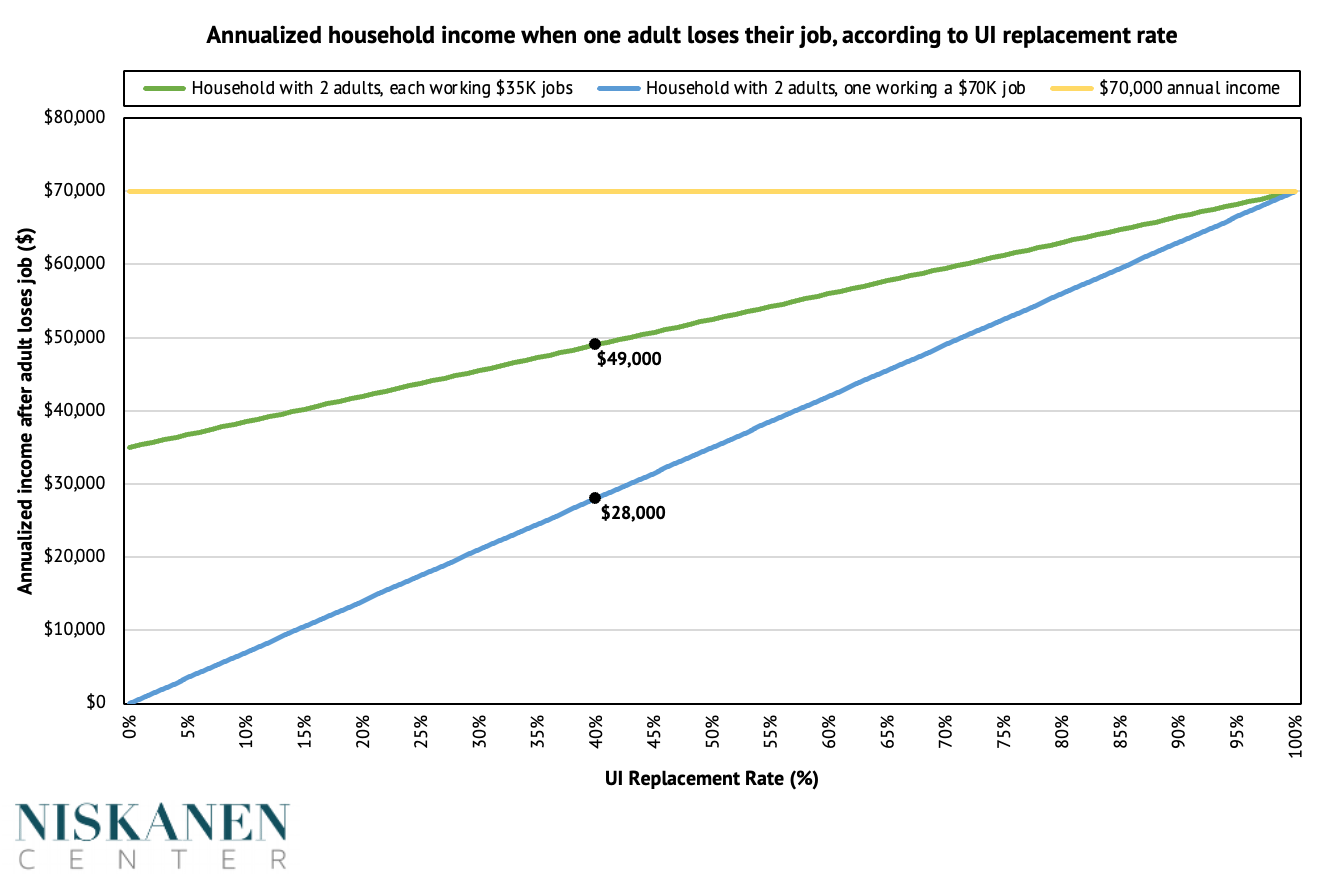 Two sources still contribute to Family A’s income: one adult is still earning a $35,000/year income from a job, and the other adult is receiving a $14,000/year amount of UI benefits. The worker in Family B had an initial salary double that of one of the adults in Family A, but the 40 percent UI replacement rate means that Family B’s income rate drops to $21,000 below Family A’s income. 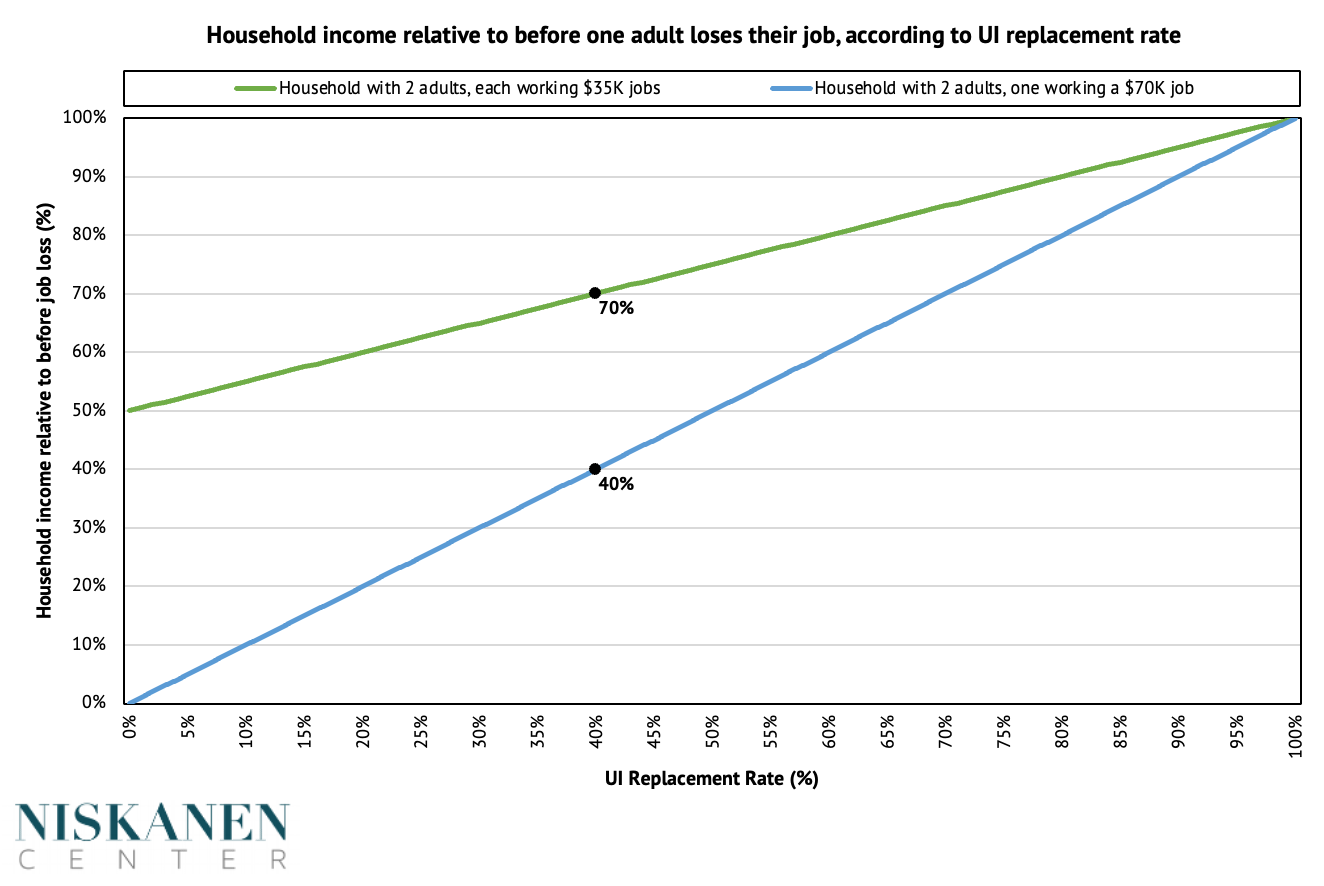 Since many states cap benefit amounts at low levels, pre-tax family income with unemployment insurance can fall below 40 percent of prior income. For example, if Families A and B lived in Arizona, the results of job loss would be more severe. Weekly UI amounts are limited to $240. That means the benefit payment Family B would receive translates to a $12,480 annualized income (18 percent of pre-job loss income). In contrast, Family A’s income would be at $47,480 (68 percent of pre-job loss income). Low income replacement rates hurt all unemployed workers and serve as an implicit penalty on households with a sole earner.

Higher UI benefit amounts give stability to families experiencing unemployment, especially those with a single earner. In two-earner households, both adults have an incentive to work simply because a sole-breadwinner losing income can be disastrous with today’s UI system. Two sources of low- to moderate-income are a financial buffer against unemployment events in a way that a higher single income is not. If policymakers want to achieve the ‘One Single Income’ aspiration and enable a parent to remain home to raise the children, UI expansions are a necessary step to get there.

Congress Should Include Unemployment Insurance Reform in the Reconciliation Bill
You will likely be unemployed before the next crisis
The Economics of a Job Guarantee: Wage and Employment Effects