The insulation of social networks along educational lines can warp perceptions about the distribution of educational attainment. For example, many college-educated people may be surprised to learn that only a third of Americans over the age of 25 have Bachelor’s degrees, given the higher rate of college attainment within their social circles.

Perceptions on how often people face job loss and require unemployment insurance are likely skewed for related reasons. Unemployment spells occur more frequently than many realize, but the risk of unemployment is higher for workers without a Bachelor’s. Simultaneously, there is a significant educational divide between the median American and those working in public policy (nearly all members of Congress have a college degree). The unrepresentative demographics of our national policymakers could be impacting the legislative urgency needed for unemployment insurance (UI) reform, creating a policy blindspot that undermines the economic security of working-class families.

The educational divide in unemployment risk

The policy response to unemployment for much of the past two years was remarkable. Congress recognized the severity of the moment, enacting unemployment programs that prevented millions from falling into poverty. Regrettably, just as quickly as unemployment insurance entered the national focus, it abruptly left the conversation. Permanent upgrades to our broken UI system are still needed. Yet many policymakers appear to still misjudge the extent that job loss impacts workers at all times and the direness of inaction.

Periodic survey data helps explain this misunderstanding. The National Longitudinal Survey of Youth tracks, among other metrics, how often individuals become unemployed. The chart below reflects what happened to the cohort of people around the median age of Representatives and Senators. Respondents were stratified according to education demographic and the unemployment spells experienced. Values reflect the proportion of people at an educational level facing each amount of unemployment. A stand-out result is that a quarter of workers with only a high school degree endured ten or more unemployment spells between ages 18 and 54. Those without college degrees were over three times more likely to endure ten or more instances of unemployment than those with a Bachelor’s. 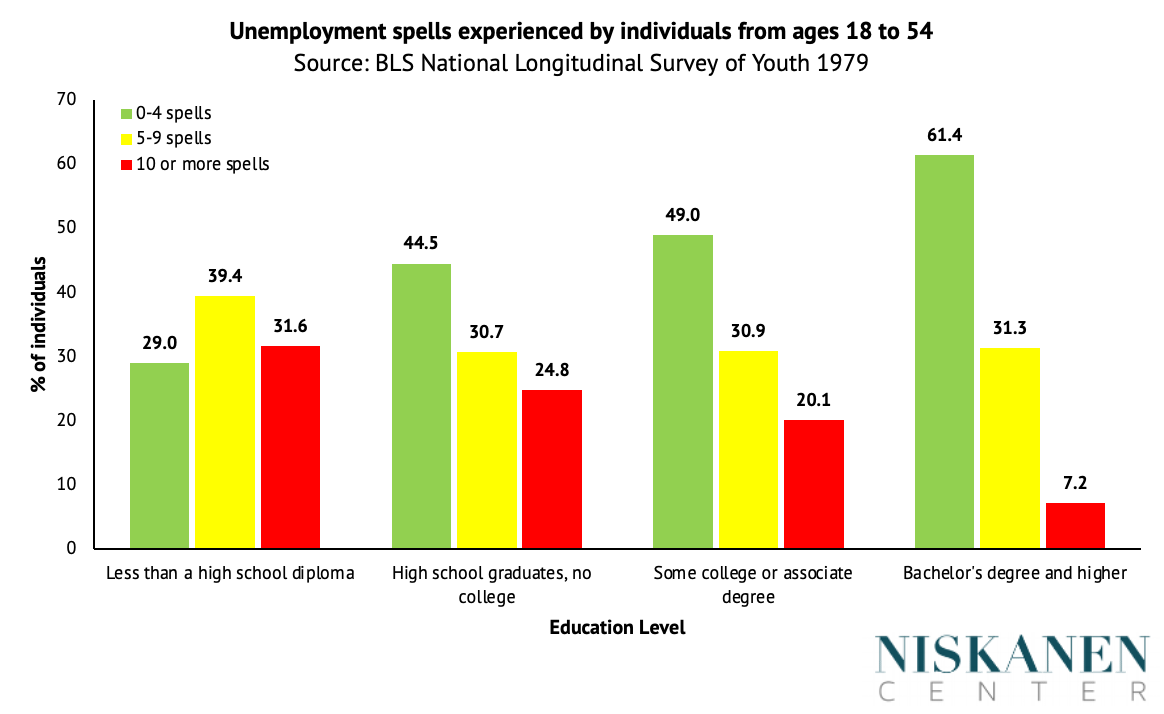 National policymakers’ experiences with job loss are presumably then much different from those they represent. More than 60 percent of college-educated people, the demographic from which policymakers overwhelmingly come, experienced less than five bouts of unemployment. In contrast, most of those without a college degree were unemployed in five or more instances within a 35 year period. Idleness on a policy response is harmful since the period between jobs is so insecure without adequate unemployment insurance.

While insufficient action has been dedicated to unemployment insurance reform among lawmakers on both sides of the aisle, this is particularly true among conservatives. So far, comprehensive proposals to improve unemployment programs have come from the left. Republicans’ reluctance to engage on this issue is a missed opportunity, as their priorities would benefit from a stronger UI system.

Conservatives argue that a university degree shouldn’t be necessary to achieve success. They are right. Basic economic security shouldn’t depend on going to college. This, however, would require a more robust set of social security programs.

Despite rigorous adherence to the “success sequence” – a process of life steps individuals can take to avoid financial hardship – even the most diligent workers can find themselves unexpectedly unemployed. Job dislocations can be difficult to predict and to prevent. When unemployment programs provide sufficient replacement wages and eligibility, people can better maintain financial stability, especially those without Bachelor’s degrees. They constitute the majority of Americans and those experiencing the most frequent bouts of unemployment. Without adequate social insurance, the implicit insurance provided by a Bachelor’s degree will remain a key rationale for attending university.

Unfortunately, Republicans are overlooking an opportunity to bolster their vision of economic opportunity for all regardless of education status. The overarching conservative approach this past year (similar to after the Great Recession) has been to cut funding for unemployment programs – with an exception being the addition of eligibility carve outs for workers refusing to get a COVID-19 vaccine. When policymakers only focus on expanding insurance for niche reasons to which they are currently sympathetic, it is inevitably going to be a problem.

Finding a new job is rarely easy, regardless of one’s background and geographic location.  The inherent difficulty in a job search is exacerbated for the majority who struggle to qualify for unemployment insurance. Ensuring that workers are guaranteed financial protections for more scenarios when they lose jobs is critical.

The path to consistent economic security shouldn’t depend on a university education, and Republicans’ zero-sum thinking on unemployment insurance is hampering that possibility from becoming more of a reality. Until unemployment programs are upgraded, workers without college degrees will continue to face tumultuous transitions between jobs and greater overall precarity, fueling “college for all” approaches to education policy as a social insurance of last resort.

Labor Markets Are Not Perfect, Our Reforms Should Reflect That
Congress Should Include Unemployment Insurance Reform in the Reconciliation Bill
How Weak is the Labor Market?