Update: This article reports on a newly published study into the effects of cash benefits on infant brainwave activity. The research is novel and has yet to be replicated. While the results are suggestive and merit further investigation, the size and statistical significance of the purported effects do not warrant conclusive statements about the impact of cash on a child’s neurological development, as convincingly argued by Astral Codex Ten, Stuart Ritchie and others. While we note these limitations below, they are worth emphasizing upfront.

As Congress continues to drag its heels on renewing the expanded Child Tax Credit (CTC), families are left without a monthly benefit to help with expenses like child care. While the Biden administration and advocates alike are searching for new ways to revive the CTC, a new and first-of-its-kind study adds important context to what’s at stake.

The new research, published in the Proceedings of the National Academies of Sciences, found that cash transfers to mothers experiencing a poverty spell in the first year of their children’s lives may change infant brain activity. The study comes from the Baby’s First Years experiment, which randomly divided 1,000 low-income mothers into two groups — one receiving an unconditional monthly cash payment of $333 and the other receiving $20 per month over the first seven years of their children’s lives. Researchers then analyzed the brain activity of 435 of the 1,000 babies. They found that the babies in the high-payment group displayed a greater amount of “high-frequency” brain activity than the low-payment group.

Researchers used an electroencephalogram (EEG), which measures electrical activity in the brain, and frequency refers to the power output measured by the EEG. High-frequency is an indicator of neural development, and prior research has found that high-frequency brain activity has positive correlations on children’s cognitive, language, memory, and socioemotional outcomes. The increased brain activity in the high-payment group could lead to greater learning outcomes later in childhood.

This is your baby’s brain on child benefits

This is the first study to produce direct evidence that cash benefits for families in poverty can help accelerate brain development in young children. Having concrete evidence that only a single year of subsidies could alter differences in the size of the cerebral cortex, which is linked to language development and executive functioning could have profound implications. Previous research by the same author, Dr. Kimberly G. Noble, saw similar results in the correlational data. The authors found “that family income is significantly correlated with children’s brain size — specifically, the surface area of the cerebral cortex…Further, we found that increases in income were associated with the greatest increases in brain surface area among the poorest children.” 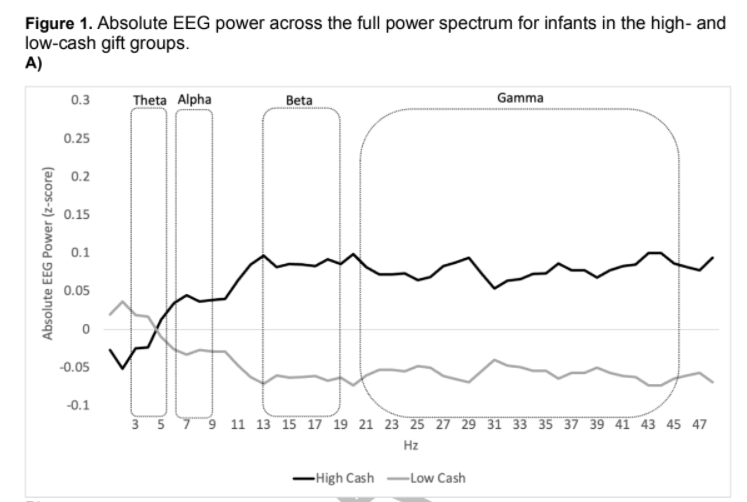 However, the study does have significant limitations. Because the COVID-19 pandemic put much of the study’s in-person data on pause, its sample was only one-third of what the researchers initially planned. As a result, the study was underpowered, and many of the results are not statistically significant using the analysis plan they had pre-registered at clinicaltrials.gov. Some of the most intriguing results in the study are compensating for this lack of data. For example, the researchers had initially planned to independently test alpha-, beta- and gamma-brain waves. While they observed differences in all three, testing them individually did not yield significant results. In combining all three, the headline result is a joint test of “high-frequency brain waves.”

Researchers often face these sorts of trade-offs while conducting experiments. While pre-registration of analyses helps researchers avoid the garden of forking paths, the straitjacket they provide can sometimes be overly narrow. Fortunately, three additional years of the study are planned with the hopes of using in-person data collection. Further analyses aim to demonstrate that the current findings hold with more data, and incorporate new tests of cognitive capacities (such as verbal fluency) that would not be appropriate for infants.

This is not the first study that underscores that financial stability yields healthier families. For example, past Niskanen work has shown the consumption of vices such as alcohol and tobacco goes down when households’ income goes up. Families experiencing financial hardship are more likely to spend money on alcohol and tobacco to relieve their stress — a monthly cash benefit can help alleviate this.

Other countries such as Canada have found similar effects on their families. When they implemented their child allowance in 2006, for example, “a study into how households consumed the benefit found spending on alcohol and tobacco fell by 6 to 7 cents on the dollar.”

As Congress considers reauthorizing the expanded CTC, policymakers should consider the beneficial impacts of a monthly child benefit on low-income families and their children’s cognitive development.