In the classic 90s sitcom “Friends,” the character Rachel dreamed of a career in fashion but found herself stuck waitressing in a coffee shop. Eventually, her friends suggested that she needed “the fear” — the fear of not having a job — to push her to pursue her desired career. And while “the fear” worked in the show, quitting your job with no immediate job prospects is unrealistic for most. The beauty of a robust unemployment insurance (UI) program is that it helps to solve this problem.

People who quit their jobs without “good cause” do not currently qualify for UI. However, as my colleague Matt Darling has noted, there isn’t exactly a distinct line between “quitting” and “firing.” Employers can effectively force employees to quit by changing work requirements, such as the location or hours. This level of ambiguity makes it difficult for UI administrators to determine whether a worker quit voluntarily or if they were pushed out of their job. The expanded pandemic-era UI benefits effectively offered a workaround to this problem when states allowed workers who quit because of COVID-19 risk to receive UI benefits.

Before the pandemic, workers were only eligible for UI if they were laid off or resigned for “good cause,” e.g., quitting to escape domestic violence or after being asked by an employer to do something illegal. However, even with “good cause,” the proof or paperwork required can make it difficult to receive benefits. Pandemic-era UI benefits broadened the definition of “good cause” and allowed workers to refuse to return to an unsafe job or accept an offer of a new position that was unsafe.

The great thing about the expanded UI eligibility and benefits that Congress created in response to the pandemic shutdowns — and has now let expire — is that they helped support recipients while they looked for better-fitted jobs. Recent data from the Federal Reserve’s “Economic Well-Being of U.S. Households in 2021” shows that “over six in 10 people who changed jobs said their new job was better overall, compared with one in 10 who said that it was worse,” as shown in the figure below. What’s more, over half of the workers who switched jobs saw higher pay and improved benefits. 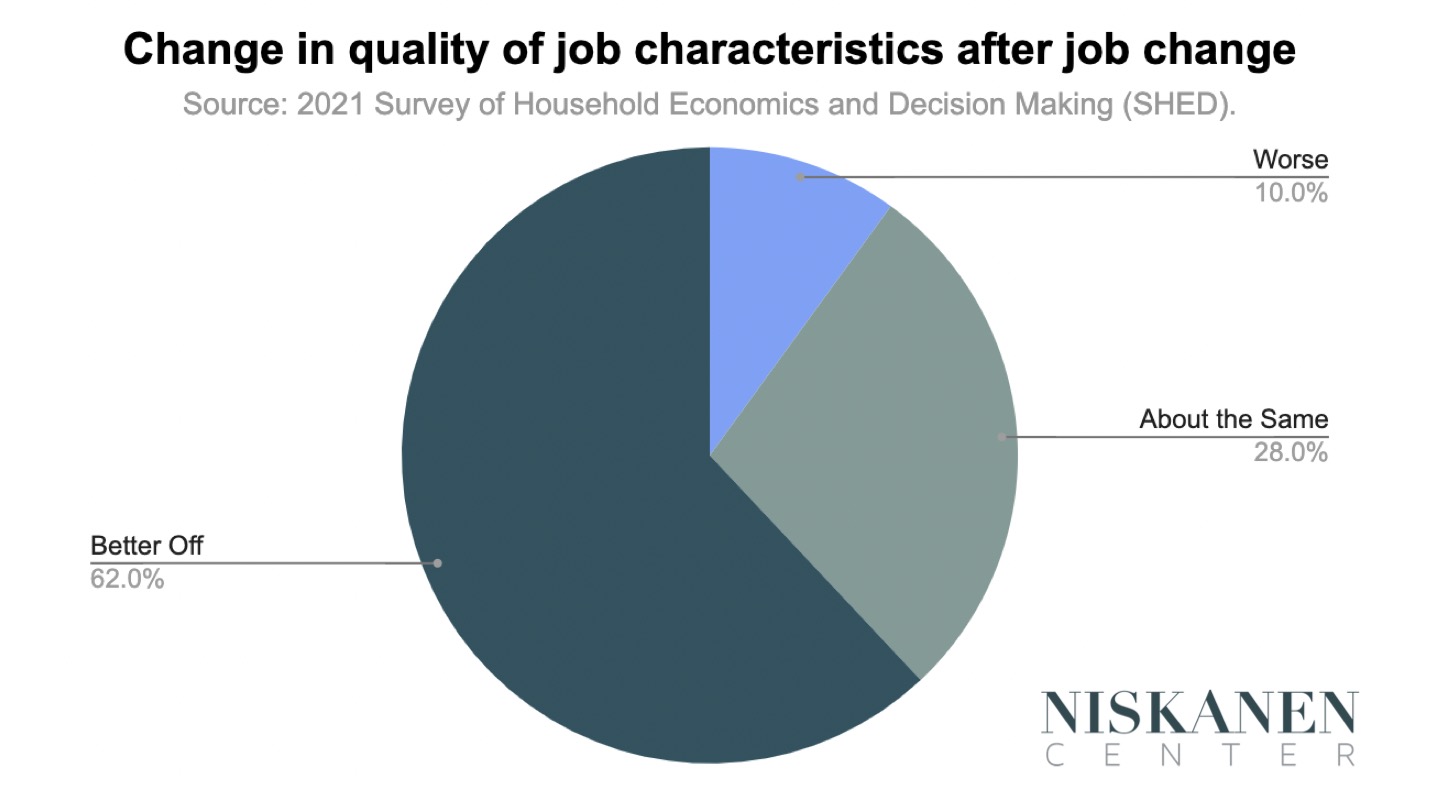 Steven D. Levitt, the author of Freakonomics, also found in a 2016 paper that in a large group of people who felt ambivalent about their jobs, those randomly encouraged to quit ended up happier in the long term than those encouraged to stay put. The pandemic UI benefits helped people considering this option to take the leap.

The broadened eligibility, paired with the larger benefits UI recipients were receiving (the CARES Act included a $600-per-week boost to UI benefits that began phasing down in August 2020 and ended after September 2021), gave workers the stability they needed to search for a more financially sound position. Most employees in low-income jobs were forced to work in person, which during a pandemic could be considered risky due to increased exposure. The time these employees spent working would also eliminate the time they could use to search for better, higher-paying positions. The expanded UI program allowed workers not to have to quit their job using “the fear” and face the risk of losing out on valuable income to end up choosing another unsafe and low-wage position.

In the pandemic, workers took advantage of expanded eligibility and benefits to leave hazardous work environments. Expanded UI eligibility and benefits were one of the factors that gave workers stability and bargaining power over the past year, which led us to what we now refer to as the “Great Resignation,” which had workers quitting their jobs at record rates. High UI benefits alone didn’t cause people to leave the labor market. But they did make it financially more viable for people to search and move to new jobs.

Flexibility for workers is essential for healthy economic dynamics — we want workers to be well-matched to their jobs, and the pandemic’s expanded UI allowed them to find those matches. Daron Acemoglu and Robert Shimer have highlighted this phenomenon in a paper showing that UI benefits lead to better job matches.

Most single-income households are not secure and UI systems as they stand are often stingy. As my colleague Will Raderman notes, “UI recipients have 40 percent of their income replaced on average, an inadequate rate. Most single-income households will not be financially secure if the sole breadwinner loses their job, especially lower-income households.” Many workers cannot afford to step away from their jobs to find a better-paid job. If there’s any gap in time (processing paperwork, etc.) between the jobs, it can take many months to make up the lost wages from even a week or two.  Expanded UI benefits gave workers the antidote to “the fear.” In the real world, low-income individuals at times cannot even afford to take a sick day, let alone abandon their entire source of income while they search for a new job. Workers need the stability that prevents them from losing out on a significant portion of their income while searching for a new job. The temporary changes to UI during the pandemic show policymakers they can design policies to address this challenge.

Improving our current UI system means implementing new reforms, including bringing back expanded eligibility and allowing people who quit their jobs under the expanded definition of good cause for unsafe working conditions, or because of a change in working conditions, to receive UI benefits. Another option includes increasing funding for active labor market policies (ALMPs) that incentivize workers to seek employment and expand employment opportunities through job readiness programs. The U.S. only spends about 0.1 percent of GDP on ALMPs, well below the international average of 0.52 percent.

With expanded UI benefits, the idea of quitting your job in pursuit of one that is more financially stable and better matched could go from a sitcom storyline to reality.