This week, the Census Bureau released data detailing the state of U.S. poverty in 2021. The Supplemental Poverty Measure (SPM) — which accounts for refundable tax credits such as the Child Tax Credit (CTC) and Earned Income Tax Credit (EITC) — fell to 7.8 percent, the lowest level recorded. The 46 percent decline in the child poverty rate was even more eye-popping, falling from 9.7 percent to 5.2 percent. This data demonstrates the promise of more permanent legislative efforts aiming to expand child benefits.

The temporary expansion to the CTC enacted under the American Rescue Plan Act (ARPA) was the primary driver of this decline in child poverty. Based on data from the March Supplement to the Current Population Survey (CPS), the expanded CTC lifted about three million children over the poverty line in 2021 versus around 800,000 in 2020 before the expansion. The CTC expansion increased the per-child credit from $2000 to $3000. It also provided an additional $600 for children under the age of six and allowed 17-year-olds to become eligible for the credit. The expansion also lifted the income phase-in, making it possible for more low-income families to obtain the full credit.

The expanded CTC’s impact on poverty was broadly shared, lowering poverty by around 40 percent across major U.S. ethnic and racial groups in 2021, compared to just 10 percent the year before the expansion. While the relative percent declines across racial groups are similar, it’s worth keeping in mind that the underlying incidence of poverty itself is higher among Black and Hispanic children. 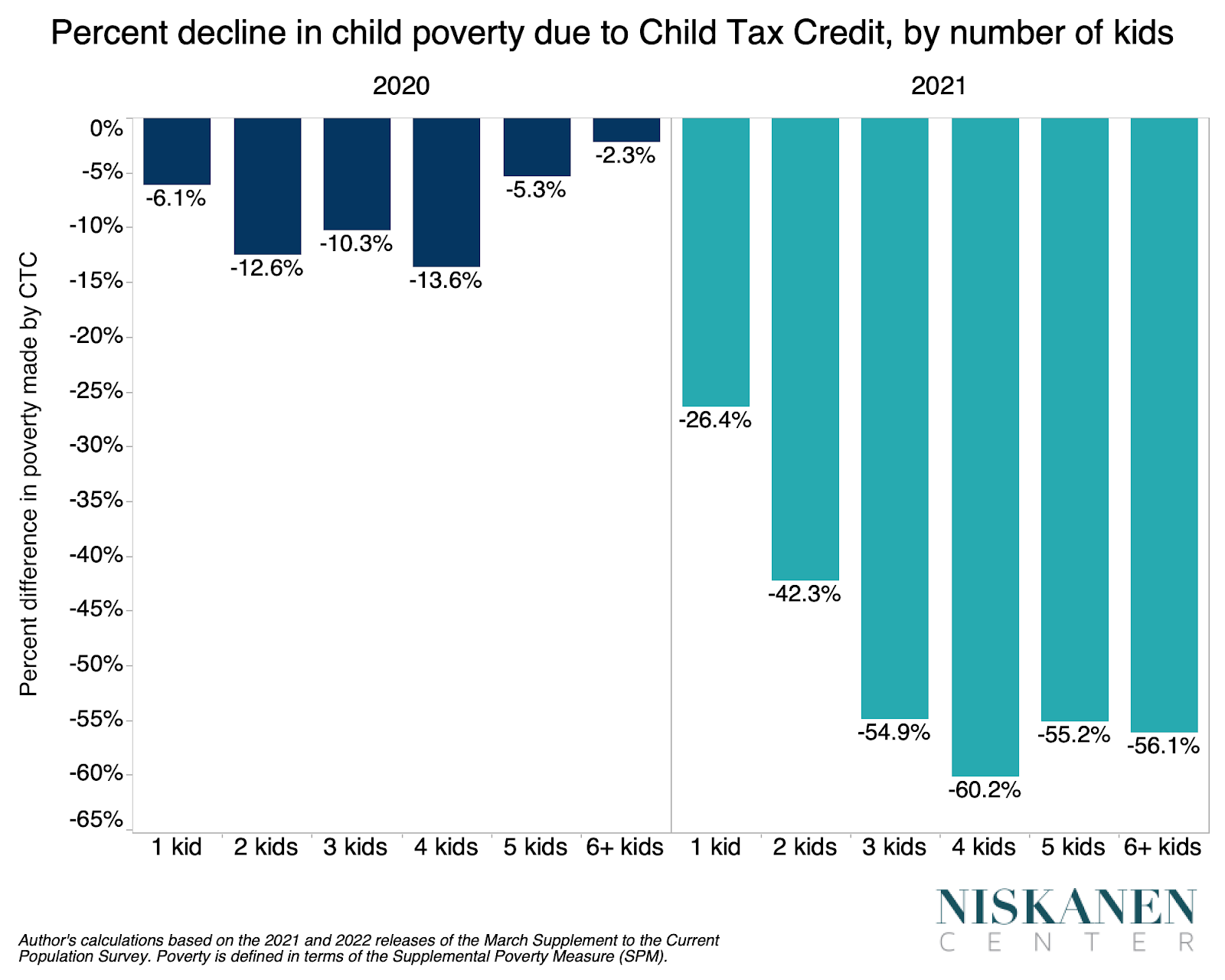 The temporary removal of the CTC’s income phase-in was especially beneficial for larger families. Families with more children saw a disproportionate reduction in child poverty rates through the CTC in 2021. In normal years, families with more children need to earn more income to fully phase-in the CTC for each of their children, mitigating credit’s ability to reduce poverty for these families. In addition to the CTC’s requirement of more income from larger families, the EITC also provides less additional assistance for each additional kid, compounding this bias against larger families.

Removing the CTC’s income phase-in is the simplest way to ensure benefits keep up with family size. However, should policymakers be unwilling to eliminate income phase-ins, they should at least allow CTC benefits to phase-in more quickly for larger families. An example of this latter approach is present in the Family Security Act 2.0 framework released earlier this year by Senators Romney, Daines, and Burr.

The temporary 2021 CTC expansion demonstrated how removing the income phase-in allows the credit to better reach families in rural areas. Incomes outside of metropolitan areas are generally lower, making it relatively more difficult for families in these areas to earn enough income to receive the full child benefits they are eligible to receive based on the number of children in the home. This difficulty is exacerbated by the previously mentioned CTC phase-in and family size issue. According to Census data, the average number of children in rural households is somewhat higher than their metropolitan counterparts.

While the recent Census Bureau data on poverty certainly shows the capacity of a permanent CTC expansion to reduce child poverty, it’s worth being clear about how the data is produced to avoid overinterpreting the Census Bureau’s figures.

Firstly, the measured anti-poverty impacts of the expanded CTC are somewhat overstated in 2021 due to how the Current Population Survey assigns CTC receipt in a given year. The Current Population Survey (CPS) used to produce these CTC estimates models tax receipt as if families received the full credit in the same year they were eligible to receive it, regardless of whether they received that income during the following year as part of a tax refund. While the CTC expansion provided advanced monthly payments for about half of the year, many families received some or all of the credit in 2022. Due to this quirk in how the CPS assigns CTC receipt, all expanded CTC income received by way of tax refunds in 2022 was counted as having been available to families in 2021.

A second limitation of the Census data is the takeup assumptions. The Census Bureau models CTC receipt as if every family received the full CTC they were eligible for. Still,  the reality is that not every family was automatically enrolled in the expanded benefit through the IRS. While the Biden administration took steps to reach out to families to sign up via an online portal, the fact is that not every eligible family did sign up. The IRS’s limited capacity to deliver a child benefit to all American families is why many commentators recommend moving the administration of a child benefit to the Social Security Administration.

Expanded child benefits can dramatically reduce child poverty in the United States. The previously mentioned data caveats, while necessary to acknowledge, do not substantially detract from this overall takeaway. The temporary CTC expansion was effective at addressing the financial strains of parenthood across a variety of family backgrounds. The removal of the income phase-in was particularly effective at improving aid to larger families and those in rural, less prosperous areas of the country. Policymakers looking to enact a more permanent dent in child poverty should keep these successes in mind as they chart a way forward.

Analysis of the Family Security Act 2.0
How to Fix Marriage Penalties Without Leaving Single Parents Behind
Administering a Child Benefit Through the Tax Code: Lessons for the IRS from Abroad